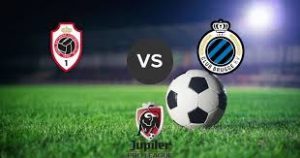 Antwerp hosts Club Brugge in a match from the fourth round of the Belgian First Division A. Let’s have a look at it.

Antwerp started the new campaign in a pretty positive way. They are unbeaten in their first three matches, winning two of them (against Sporting Charleroi and Royal Excel Mouscron) and making one draw against Kortrijk.

In the previous round Antwerp fought its way to a difficult 1-0 win during the visit to Royal Excel Mouscron. The only goal in the game was scored nine minutes before the end, when Antwerp’s William Owusu found the net after an assist by Simen Juklerod.

Club Brugge started the new campaign even better – with three wins from three games played. Ivan Leko’s boys were merciless against AS Eupen, Royal Excel Mouscron and Kortrijk. In the last round Brugge showed some great form and crushed Kortrijk with 3-0 at home. The Dutch winger Arnaut Danjuma scored twice for the home team, while Siebe Schrijvers added one more goal for Brugge.

Club Brugge are the reigning champion of Belgium, so their goal is going to be keeping the title. As usual, the competition is going to be pretty big, especially in the face of Anderlecht.

As for Antwerp, last season they were unable to qualify for the Top 6, finishing 8th in the regular season of the league. But in the way Antwerp started the new season, clearly they’d try to do better this time. The most important question is – do they have the tools for this?

This is our look at the First Division A clash between Antwerp and Club Brugge. The home team started the new campaign in a convincing way, but the current champions will try to win as much as they can, knowing how difficult it’s going to be to keep the title.