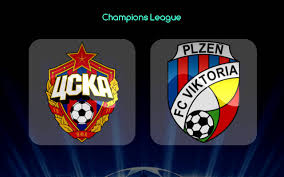 CSKA Moscow faces Viktoria Pilzen in a match from the 5th round of the Champions League group stage. Let’s take a look at this clash in the Russian capital of Moscow.

CSKA are currently 3rd in Group G of the Champions League, having won 4 points so far. They have a record of 1 win, 1 draw and 4 defeats since the beginning of the season. CSKA started very well – with 4 points against Viktoria Pilzen and Real Madrid, but in the next two games they suffered two defeats against Roma. A win against Viktoria would keep CSKA’s theoretical chances of progression, but even then they would not be in a very good position. For CSKA the more realistic goal at this moment is finishing 3rd and qualifying for Europa League.

In the Russian Premier League CSKA are 2nd in the standings with 26 points, trailing on 5 points behind the leader Zenit. So far they have a reocord of 7 wins, 5 draws and 3 defeats.

Viktoria Pilzen are 4th in Group G, having won just one point so far – exactly against CSKA Moscow in the first round. Since then, the Czech club suffered 3 consecutive defeats.

In their last game Viktoria suffered a heavy 0-5 defeat at home against the European champion Real Madrid. This once again showed us that the level is very different between some of the clubs in the competition.

Viktoria still have a chance to finish 3rd in this group and qualify for Europa League, but only if they win against CSKA. And this will be very difficult in Moscow.

These are our thoughts about the Champions League clash between CSKA Moscow and Viktoria Pilzen from Group G of the competition. We believe that CSKA are favourites at their own ground, but let’s see.