Fortuna Dusseldorf hosts Eintracht Frankfurt in a last match from the 25th round of the German Bundesliga. Let’s take a look at this fixture.

At this moment Fortuna Dusseldorf are 11th in the Bundesliga with 31 points. They have a record of 9 wins, 4 draws and 11 defeats since the beginning of the season. In their last five games Fortuna are doing good – three wins, one draw and one loss. These results helped the team to get away from the relegation zone for now.

In their last game in the Bundesliga Fortuna celebrated a second consecutive win, beating Schalke 04 with 4-0 at the Veltins Arena in Gelsenkirchen. It was just a terrific performance by Friedhelm Funkel’s team. Dawid Kownacki scored a brace for the team from Dusseldorf, while Dodi Lukebakio and Benito Raman also scored for the visitors.

Meanwhile Eintracht Frankfurt are 5th in the Bundesliga with 40 points, still fighting for a Top 4 finish and a qualification for the Champions League. At this point Eintracht are just 3 points behind the 4th Borussia M’gladbach, so they have pretty good chances to achieve their goal. Their record in the league so far looks like this: 11 wins, 7 draws and 6 defeats. 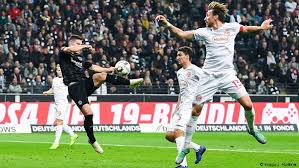 In their last five games in the Bundesliga Eintracht are unbeaten – two wins and three draws. In their last game they celebrated a 3-2 win over Hoffenheim at home. Filip Kostic, Sebastien Haller and Goncalo Paciencia scored for Adi Hutter’s team. It was a difficult, but an important win for Eintracht.

There could be some tiredness in Eintracht’s team for this game, because on Thursday they have a game against Inter in Europa League.

That’s what we had to say about the Bundesliga fixture between Fortuna Dusseldorf and Eintracht Frankfurt from the 25th round. Good luck!