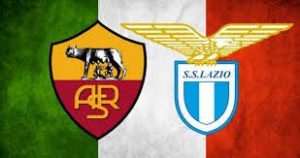 Roma hosts Lazio in the big derby of the Italian capital Rome. This match from the 7th round of the Serie A is going to be played at the Stadio Olimpico on Saturday afternoon. Let’s take a look.

Roma have some difficulties since the start of the season. Eusebio Di Francesco’s team is currently 10th in the league standings, which is dissapointing, to say at least. Right now the Wolves have 8 points won and a record of 2 wins, 2 draws and 2 defeats. They are really inconsistent, having won just one of their last five games – against Frosinone in the previous round of the league.

For Roma it was a good way to get its confidence back before the Capital derby. Cengiz Under, Javier Pastore, Stephan El Shaarawy and Aleksandar Kolarov scored for the home team at the Olimpico.

Lazio on the other hand are doing better than Roma since the start of the season. The Eagles are currently 4th in the standings with 12 points and a record of 4 wins and 2 defeats. Right now Lazio are in a run of four consecutive wins in the league, which tells us that they are in a pretty good form right now.

In their last game Lazio achieved a 2-1 over Udinese at the Dacia Arena. Francesco Acerbi and Joaquin Correa scored for Simone Inzaghi’s team.

Clearly Lazio are the team in a better form since the start of the campaign. Roma were better last season, but now they started with a lot of unexpected mistakes. Lazio on the other hand are in a great run of results in the last few weeks, so maybe they are a slight favourite here. But in derbies like this, it’s very hard to name a favourite. Let’s see what’s going to happen.