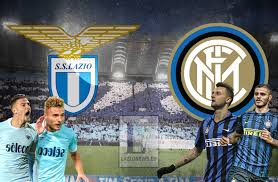 Lazio hosts Inter in a last game from the 10th round of the Italian Serie A. This match is going to be played at the Stadio Olimpico in Rome on Monday night.

Lazio are currently 4th in the Serie A with 18 points won so far. The Eagles have a record of 6 wins and 3 losses since the start of the campaign, no draws yet. In their last five games Simone Inzaghi’s boys are doing pretty well, winning four of them and conceding just one loss against Roma in the Capital derby.

In their last game Lazio enjoyed a 2-0 win during the visit to Parma at the Stadio Ennio Tardini. Lazio’s both goals came in the last 10 minutes of the game. First Ciro Immobile score a penalty for the Capital club. This goal was followed by another one, scored by Joaquin Correa in the injury time of the match.

Inter on the other hand are currently 3rd in the Serie A with 19 points – just one point more than Lazio. The Nerazzurri have a record of 6 wins, 1 draw and 2 defeats since the beginning of the campaign. In their last five games Luciano Spalletti’s boys are just perfect – five consecutive wins.

During the week Lazio had a challenge in Europa League, beating Olympique Marseille with 3-1 at the Stade Velodrome. Wallace, Felipe Caicedo and Adam Marusic scored for the Italian team.

Inter enjoyed a 1-0 win over Milan in the derby in the previous round. The game was about to end with a 0-0 draw, but Inter’s captain Mauro Icardi scored a winner in the injury time of the match.

During the week Inter had a game in the Champions League, suffering a 0-2 defeat against Barcelona.

These are our thoughts about the Serie A clash between Lazio and Inter. Good luck!