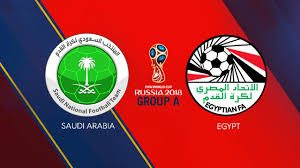 The underdogs in Group A of the World Cup Saudi Arabia and Egypt face each other at the Volgograd Arena in the city of Volgograd. This is an opportunity for both teams to take the third place in this group.

Saudi Arabia and Egypt are still without a point after the first two rounds of the World Cup. They are without any chance to reach the next phase of the tournament, but they can at least take the third place in the final standings. Right now Egypt are third in the group, because they have a better goal difference than the Green Falcons. This means that if this game ends with a draw, it will be Egypt who will take the third place in the final standings.

Saudi Arabia showed ambition before the World Cup, appointing for manager the Copa America winner Juan Antonio Pizzi. But it’s hard to say that the former head coach of Chile did very well in the competition. Although there’s one more game left and Pizzi could eventually lead the Green Falcons to a point or three. For a team of Saudi Arabia’s quality, even this would be a success in the tournament.

Egypt had high hopes for the World Cup this year, mainly because of the presence of a player like Mohamed Salah. Sadly for the Pharaohs, Salah missed the opening game against Uruguay because of his shoulder injury. He played in the second match against Russia, but clearly he was not at one hundred percent fit. Salah scored a goal from a penalty kick, but he was far from his highest levels against Sbornaya.

Juan Antonio Pizzi have some problems with his squad before the game. Several key players of Saudi Arabia are doubtful for the game, because of different problems. There are three starting defenders of the Green Falcons, who can miss the game – Ali Al-Bulaihi, Omar Hawsawi and Mansoor Al-Harbi. If they are not fit to take a part in the match, it would mean that Pizzi will have some serious problems with his defense.

Egypt can’t qualify for the knockout phase, but the Pharaohs can achieve their first ever win at the World Cup. This is some huge motivation for Hector Cuper’s players. Everyone in Egypt is hoping that this time Mo Salah would be more fit to show his true qualities on the pitch. Liverpool’s star had a quiet evening against Russia, but now he gets another chance to show his incredible qualities.

Another curious fact – this is the first ever match between two Arab countries at the World Cup. This makes the game even more important for these two teams. It’s a matter of honour and prestige to win.

We thing that Egypt are a slight favourite to win this one. The Pharaohs have a figure like Mo Salah in their squad, which is making them favourites in the match. He can be the difference between these two sides on the pitch. If Mo Salah shows his best game, Egypt would win.