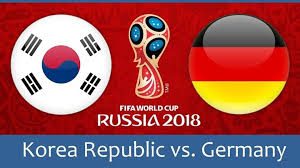 South Korea faces the world champion Germany in a match from Group F of the FIFA World Cup. This game is going to be played at the Kazan Arena in the city of Kazan. Let’s have a look.

For both teams this is an “all or nothing” type of game. The Korean team is currently 4th in the group with 0 points won so far. Despite of this, they still have theoretical chance to reach the 1/8-finals, but only of they beat the Mannschaft with at least two goals difference.

Meanwhile Germany are 2nd in the group with 3 points, but their participation at the 1/8-finals is still far from secure. They are currently on par with the 3rd Sweden, who also have 3 points. In the same time Sweden are playing against the leader of the group Mexico.

The World Cup did not go very well for the Korean team so far. They have lost both of their games so far, being defeated from Sweden and Mexico. Despite of this, the situation in the group is so tight, that even the Asians have chances to reach the next phase of the tournament.

In their previous game South Korea suffered a 1-2 defeat against Mexico, scoring their first goal at the World Cup this year. The team’s biggest star Son Heung-Min scored the only goal for the Koreans in the match, but it was not enough against the Mexicans.

Germany had a real scare in their previous match against Sweden. They were very close to a draw, which most likely would have kicked them out from the competition. It was Toni Kroos’ brilliant free kick in the last seconds of the match which led to Germany’s first win in Russia.

Germany’s manager Joachim Low can’t be satisfied with what his team is showing in Russia so far. The Germans dissapointed against Mexico in the first round of the group stage and they were far from impressive against Sweden. Right now the Mannschaft have good chances to reach the eliminations of the World Cup, but they would have serious problems in defending their crown if they don’t improve their performance.

Joachim Low have some problems in the squad before the game against South Korea. The central defender Jerome Boateng is suspended for the clash, while the midfielder Sebastian Rudy is injured for the game.

South Korea can’t rely on Park Joo-Ho, who is injured and missing the game. The same could be said about the captain Ki Sung-yueng, who recieved a calf straing and can’t be used by the manager Shin Tae-yong. This is a serious problem for the Asians, because Ki Sung-yueng is arguably among the most important players of the team.

It’s time for Germany to show their true qualities and prove to everyone that they deserve to be among the 1/8-finalists in Russia. The Mannschaft didn’t show its best qualities against Mexico and Sweden, but we are sure that they are going to be a much different team against South Korea on Wednesday.