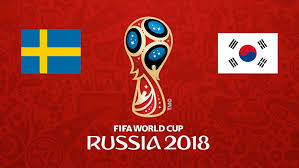 Sweden faces South Korea in a game from Group F of the FIFA World Cup in Russia. This sounds like an interesting match, so let’s have a look at it.

Sweden qualified for the World Cup, after making a huge upset by eliminating Italy at the playoffs. A 1-0 win at home and a 0-0 draw at Italian soil was enough for the Scandinavians to reach the World Cup. It was a huge relief for all Swedes, given the fact that they have missed the previous two World Cups in South Africa and Brazil. It was a long wait for the Swedish team to return to the competition.

After the historical playoff against Italy, Sweden took part in four friendly games. Janne Andersson’s boys didn’t very well in these matches, being unable to record a win. Sweden suffered defeats against Chile and Romania and made draws against Denmark and Peru.

South Korea successfully qualified for the World Cup, after finishing second in Group A of the qualifiers in the Asian region. The only team which did better than them in the group was Iran, who won it with an impressive advantage of 7 points. In the qualifiers South Korea recorded 4 wins, made 3 draws and lost the same amount of games.

In their last five friendlies before the World Cup South Korea won just once – against Honduras. The Asian team also made one draw against Bolivia and suffered defeats against Poland, Bosnia and Herzegovina and Senegal.

The big star of Swedish football Zlatan Ibrahimovic is not a part of the national team anymore, but this country still have some solid team to show. Although the Swedes do not have other big stars as Ibrahimovic, they have an united squad which plays with a positive team spirit. Among the leaders of this team are players like Emil Forsberg (RB Leipzig), Sebastian Larsson (Hull City), Albin Ekdal (Hamburger SV), Victor Lindelof (Manchester United) and Marcus Berg (Al Ain).

The Korean team also have some interesting individuals. Arguably the main man in this team is Tottenham Hotspur’s ace Son Heung-min. The forward enjoyed a very strong season with Spurs in the Premier League and the Champions League, proving to be a player of a very high calibre. Other players of the Korean team who play in Europe are Verona’s Lee Seung-woo, Augsburg’s Koo Ja-cheol, Swansea’s Ki Sung-yueng and Salzburg’s Hwang Hee-chan. But the majority of this team currently plays in Asia. Is this a good or a bad thing – we shall see.

South Korea reached the 1/2-finals of the 2002 World Cup on their own ground, but since then they have been unable to do something similar. In 2010 the Koreans reached the 1/8-finals, but 4 years ago they were unable to pass the group stages of the competition. Sweden on the other hand are eager to prove that they are better without the superstar Zlatan Ibrahimovic. And we think that they are favourites against Korea.